We are music junkies and vinyl enthusiasts, and we have spent our lives buying, playing, collecting, trading, selling and listening to music in its many genres on all formats! To this day we’re still Lovin’ and Listenin’ to Music!

3GreatDogs is based on the eastern seaboard of the United States and headquartered in the “Heart of Georgia“ — in the legendary and historic music city of Macon — with remote offices in the northern Virginia suburbs of Washington, DC.

Although we’re located primarily on the east coast, our search for vinyl records doesn’t stop on this side of the country. We know that past releases of vinyl records are more numerous than all of us combined could ever imagine, but that doesn’t stop us. We’ve dedicated ourselves to the task of scouring the entire country to find quality, hard-to-find used classic and vintage vinyl for our members all over the world.

Our vinyl curation subscription service is rooted in an idea that was planted in the minds of our partner owners — music and media professionals — while they worked together as volunteers during a celebration called “Snoop Down Baby Jam 2014.” The 16-hour event was a day and night of food, fun and fellowship in honor of the life of soul and blues great Robert “Chick” Willis (read an article about the celebration here).

Because their collaboration on the event was so successful, the pair decided to look for a more permanent partnership opportunity. They soon decided to begin this service with the distribution of inventory from the large record store — a brick-and-mortar business — once owned and closed by one partner, a musician who had once traveled the world as a band member for a popular Top 40 recording duo. The other partner, a music lover and new media expert with loads of production experience, leads our efforts in this 21st century subscription service known as 3GreatDogs.

We love dog, too! And it is our three pets — all rescues — that inspire the name of this venture. 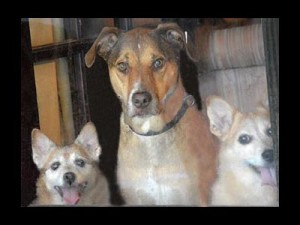 Lucy and Ethel, Jack Russell Terrier/Pembroke Welsh Corgi mixed breeds, are appropriately named because they remind us of those two female leads on the “I Love Lucy” television shows: one is a jokester and the other is her no-nonsense sidekick. Though mischevious at times, they are wonderfully behaved dogs that became a part of the family after it was discovered that their previous owner was abusing them through severe neglect. L&E are sisters and litter mates born in early Spring 2005, so they’ve been together all of their lives — and with us almost that entire time, since they came to us when they were just five months old.

Venus is the “little sister” of the trio. She joined us when she was five years old. That was when her previous family — who had rescued and adopted her from an animal shelter — were unable to take her with them when they moved from Atlanta to Washington, DC. Born in early Fall 2009, Venus is an American Staffordshire Terrier/Chinese Shar-Pei mix (no, she doesn’t have the deep wrinkles or blue-black tongue). She is one of the sweetest dogs one could ever encounter and we know that she loves being part of the LEV pack, because she tolerates with great patience the daily antics and never-ending energy of her JRT sisters.

In the photo above, from the left are Ethel, Venus and Lucy posed in their usual unshakeable stare.